On April 3, 1876, the masons of Escambia Lodge, No. 15, F.&A.M. voted to establish St. John's Cemetery as Pensacola's second public cemetery. The circumstances and background for its creation reflect the diverse nature of community and the town's development.

The site of Pensacola today was not established until 1756, when the Spanish, who had been living on Santa Rosa Island, decided to settle here. A destructive hurricane had prompted the move. The western end of the site was marked with an excellent freshwater stream (modern-day Spring Street). The northern end was bound by a swamp which went from modern day Garden Street to Wright Street. The eastern end was also bound by a swamp (modern day Aragon Court) and a stream that flowed into the bay, which bound the entire southern end of the town. Old maps indicate that the first burying ground was located just west of Spring Street--in the area now occupied by the M.C. Blanchard Judicial Center toward modern-day DeVilliers Street. British military commander General Henry Bouquet in 1765 was the most famous person ever interned in the Old Pensacola Burying Ground, which may have been about 3 acres.

Waterfront development in the early 19th century prompted abandoning the Old Burying Ground, which was easy to do since most graves had wooden headstones except for the large brick masonry Bouquet gravesite. There was also a public health concern, as some bodies had been buried in peoples' private property. The granite headstone at Spring and Main Streets honors one such person--Alexander McGillivray, who was the Great Creek Chief that died here in February 17, 1793 and was buried in the gardens of the Panton, Leslie Trading Company.

Alternatively, a new cemetery was established in 1807 on 8 acres just northeast of the town's peripheral swamp--similar to the Old Burying Ground--just outside the town. Named St. Michael's Cemetery, after the sole Catholic church in town by that name, the cemetery would serve as the community's only burial site until the U.S. government established a Navy Yard in 1826 and its adjoining cemetery, which eventually became Barrancas National Cemetery.

Pensacola remained a predominantly Catholic town prior to the Civil War. Religious tensions between the native Spaniards, their descendants, and the newer Protestant emigrants flared periodically. Building a wall and defining Catholic and Protestant sections were discussed, but relations usually cooled before formal actions were taken. Some families, however, took comfort that their plots were surrounded initially by brick and then later iron and concrete walls, from any potential neighbor who happened to be of the other faith. While no records indicate any priest or lay leader from St. Michael's Church ever prohibited any Protestant from being burying there, there were strong religious biases, which created mistrust and uneasiness among many.

Perceiving St. Michael's Cemetery was becoming crowded, the Masons endeavored to establish a new cemetery that served town's growing population. While there continued to be Protestant burials in St. Michael's Cemetery after this period, they were infrequent except for people who already had purchased plots or during times of turmoil, like the yellow fever epidemic of 1882. In times like these, the dead were buried as quickly as possible in the closest cemetery, which was St. Michael's. A vivid example was the Rev. Charles DuBose, who as the Methodist preacher, fell victim to the disease while ministering to the sick; he was expeditiously buried at St. Michael's.

As all previous Pensacola cemeteries originally had been located outside of town, so too was St. John's. Located on a gradually sloping hill, filled with native magnolia, oak, sycamore, and pine trees, the cemetery eventually was plotted to cover some 26 acres within 10 city blocks. Proceeds from plots sold initially went to pay off the mortgage acquired to purchase the land, to cover improvements, and to establish a perpetual endowment. While the trustees were drawn from the Lodge, neither the organization or any member would receive any financial benefit from this endeavor. Later, in 1908, at its entrance on "G" Street, a gate house was constructed, which consisted of a chapel on one side and offices and storage rooms on the other. A fish fountain was also installed near the gate house. It was the largest cemetery yet constructed for a city that many Masons speculated would grow into needing such place.

Concurrently, Samuel Goldbach was purchasing land outside of town on Cervantes Street, between Q and R Streets, for a Jewish Cemetery. Only after the Civil War had Jews made Pensacola their home.

The biggest growth post-Civil War in Pensacola, however, were from Protestants who moved to the area from elsewhere. These people were attracted to St. John's Cemetery, which was new and reflected the cosmopolitan, progressive nature of the community. The first recorded burial was Martha Eleanor Screven Frierson, who died August 10, 1876. In time, she would be joined thousands of others who had worked in all walks of life--governors, chief justices, mayors, physicians, soldiers, sailors, educators, businessmen, and children. From inception, the cemetery always was open to people of all faiths and races; however, there were specific areas for them. The largest area was reserved for white families, then smaller individual plots, followed by negroes and Indians. Even smaller areas went to people of the Eastern Orthodox faith, union members, seamen, transient Masons, indigents, and even young babies. 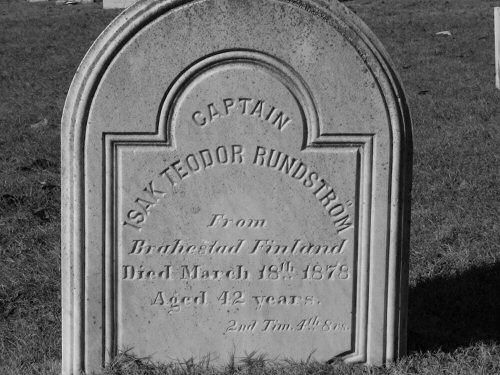 Whereas, St. Michael's Cemetery contains mostly people who built Pensacola prior to the Civil War, St. John's Cemetery contains the saints who built Pensacola as we know it today. This is because Old Pensacola was largely destroyed during that conflict, and most previous residents did not return. The new Pensacolians built an entirely new city, greatly expanded upon physically and economically. Some of these saints have familiar names that adorn local streets, like Avery, Baars, Bobe, Hallmark, Hyer, Jordan, Lee, Maxwell, Merritt, Pace, Wright, and Yonge. Other names are less familiar, but they are remembered by their markers, which can still be seen within the serenity that surrounds the cemetery.

St. John's contains the largest and most diverse number of gravestones and monuments in northwest Florida. Annually, there are memorials and picnics to celebrate and to remember those buried within. A comprehensive list of the burials, which continue to this day, is available online. The public is cordially welcome to visit the saints of St. John's. The cemetery is open to the public all year long.